For over 90 years Joe Patti’s has been located on Pensacola Bay, not always as it exists today.

In the early 1930s Anna & Joe Patti started selling fish from their front porch on Devillier’s Street in Pensacola. Captain Joe had a philosophy. He would sell only the highest quality fish at a fair price. He wanted his customers to trust him and he wanted them to become “happy regulars”.

developed a reputation of being hard to please. He refused much more that he accepted. Over the years he instilled this same philosophy in all six of his and Anna’s children. Each of the sons were captains of their own shrimp vessel. At the market they shaved ice, cleaned fish, graded shrimp and fish, and served customers among many other day long chores. The daughters dedicated their time to the family business by working alongside their brothers for many years 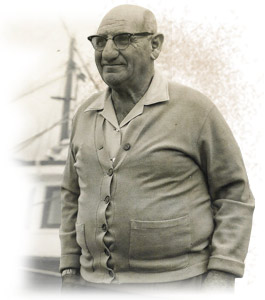 throughout the early nineties, Joe Patti’s served all of the restaurants along the Gulf Coasts of Florida & Alabama. Joe Patti’s fleet of refrigerated trucks ran seven days a week and made Joe Patti’s Seafood well known and highly sought after beyond Pensacola. As times changed Joe Patti’s decided to dedicate their expertise to the retail operation and let food distributors do what Joe Patti’s had done so well for many years.

the store expanded, opening a gourmet delicatessen, sushi bar, and wine shop. Amangiari’s opened in 1997 offering specialty foods from around the world as well as products made locally. Oils & vinegar, meats & cheeses, fresh-baked bread, caviars & pates and so much more that is now a staple at Joe Patti’s Seafood.

The sushi bar opened using fresh seafood right off the counter with the market selling all of the ingredients for the consumer to roll their own if desired. Anna’s Fine Wine made the store’s expansion complete. Anna’s Fine Wines offers boutique & highly allocated wines, everyday drinking wines, microbrew beers & cigars.

Also known throughout the world is Patti Shipyard. We have been building all types of vessels since 1979; and have attracted world wide interest due to the quality construction of the vessels, from the fishing industry, the towing industry, the gaming & excursion industries, and the Corp. of Engineers. We are considered the ship yard of choice, earning awards from our valued customers.